We are committed to increasing the user base of XAFS in the catalyst community, and so in part the BAG works as a training scheme. The team at Harwell guides new users through the proposal and experimental stages, showing them the potential of XAFS for their projects and training them on the analysis of their data. We ask all PIs to name on their proposal a member of their group who will be responsible for the beamtime measurements and who will learn how to analyse the data. 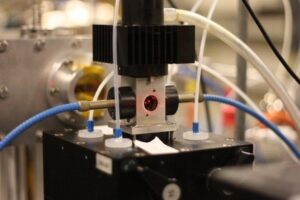 We operate by sending out two calls for proposals per cycle, which are assessed by a panel comprising representation from Diamond, Hub scientists, and representatives from two other institutions (changed on a rolling basis). The latter positions are filled by researchers in catalysis one of whom usually has XAFS experience. The BAG allocation prioritises access based on:

Both in situ /operando studies and standard ex situ (rapid access and proof of concept) measurements are facilitated, with generally an even mix of the two proposal types being awarded time. Due to our aim of attracting new and inexperienced users to XAFS, proposals are not often accepted ‘as is’ but redesigned to make the best use of time and provide the user with the measurements they need. In this way, we plan the BAG shifts to facilitate the greatest number of projects efficiently. No single user is awarded more than 3 shifts in any one call and we limit experienced users of XAFS to short bursts of time: in this way the BAG should not serve as an ‘easy’ access to B18 for those who should apply through the Direct Access Route.

It is important to note that that for heavy users of synchrotron facilities this method of access will only play a small contribution to the amount of time they require. Their role within the BAG proposal is to provide the interface between the inexperienced members and Diamond, enabling a larger cross section of the UK Catalysis Hub network to benefit from the techniques available. These users may receive small amounts of flexible access, where required, to assist in finishing research projects and hasten subsequent publications.

I have been awarded time in the BAG, what now?

Once you are notified that your proposal has been awarded time on the BAG, please make sure that you let the BAG coordinator know who on you team will be attending the experiment. All those planning to come to Diamond must be registered in UAS (https://uas.diamond.ac.uk/uas/) and must have watched the health and safety video and completed the test (https://www.diamond.ac.uk/Users/Experiment-at-Diamond/Before-you-Arrive/Safety-Video-and-Test.html).

The Principal Investigator or Alternate Contacts need to submit the ERA (Experimental Risk Assessment) in UAS. All the samples and any equipment that will be brought to Diamond must be specified in the ERA. If it is necessary to bring your own sample environments please discuss this in advance with the BAG coordinator. The ERA template can be found using this link – BAG Risk Assessment.

If your scheduled experiment requires overnight accommodation on-site, the BAG coordinator will organise that for you and will let you know the details. However, you will have to organise your own travel arrangements. Please note that Diamond will only cover the subsistence for the Core Team, so you will have to pay for your meals and claim the money back.

Please read the latest guidance on Coronavirus issued by STFC to Harwell Campus visitors before you travel.

To find details about how to travel to Diamond, please visit: https://www.diamond.ac.uk/Users/Experiment-at-Diamond/Before-you-Arrive.html

Sometimes it is simpler to ship your samples to us. Samples being shipped should be address to:

When you arrive at Diamond you will be given an access card. This is usually at the main security gate to site. The card will be pre-loaded with the appropriate access for your session. If there are difficulties with your card please contact the user office (ext. 8571). Please wear your access card at all times and return the card, along with the lanyard at the end of your session.

Once on the beamline, please follow the instructions given by the BAG coordinator and or local contacts in charge of the experiment. The way the BAG works, it is difficult to follow the scheduled timetable. Please be patient if your experiment is delayed from the initial estimated time.

All proposals require a report once the session scheduled in that proposal are complete.

In all cases this report should include any changes in methodology that were required and highlight key results as well as indicate the status of the project(s) in light of these results. Experiment Reports are made available to the Peer Review Panel when they are considering further proposals from the same Principal Investigator and failure to submit a report can be considered detrimental for future access.

Users publishing work containing synchrotron data from Diamond Light Source should ensure they acknowledge Diamond in all publications (including conference proceedings) arising from work carried out wholly or partially at Diamond. The following acknowledgement statement must be included in all published reports:

“The authors wish to acknowledge the Diamond Light Source for provision of beamtime (proposal number).”

Please also inform the BAG coordinator of all Publications arising from the BAG. 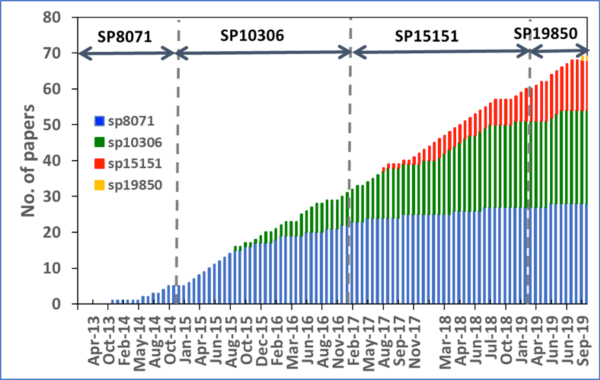 BAG Impact Case Study: Quantitative production of butenes from biomass-derived γ-valerolactone catalysed by hetero-atomic MFI zeolite
UK scientists have used synchrotron X-ray techniques to help develop a catalyst that converts biomass into fuel efficiently, potentially leading to a more sustainable source of petrochemicals for use in industry. Converting biomass into light olefins – the group of petrochemicals that includes ethene, propene and butene – requires a catalyst and a lot of energy to convert the waste from organic matter such as wood or grass. Researchers led by the University of Manchester designed a highly efficient zeolite catalyst that uses less energy to produce the olefins from renewable biomass sources. Read more

The publications in bold are those from the last 6 months.