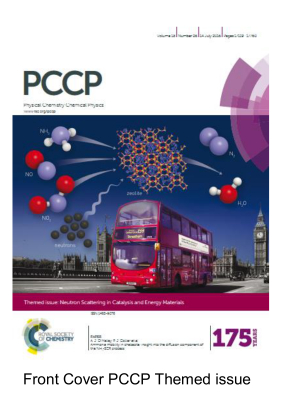 NOx emissions from the energy and transport sectors represent a major hazard to human health and this has been the focus of significant industrial and academic research.

One of the important processes in the armoury available for emissions control from vehicles, large and small, power stations, ships, trains and non-road machinery is the selective catalytic reduction reaction (SCR), in which a reductant such as ammonia, urea or hydrocarbon fuel, is injected into the exhaust to reduce the NO and NO2 (NOx) to harmless nitrogen. The use of urea (which is broken down to NH3 under operating conditions) as a reductant in SCR is a key successful strategy in R&D in diesel emissions control R&D and is already used on modern vehicles, but will become much more prevalent in the near future.

The typical catalysts used for urea (and ammonia) SCR include those based on vanadium oxide, iron supported on a zeolite, and copper supported on a zeolite (Cu/zeo). The Cu/zeo materials have proven to be extremely active for SCR, and also demonstrate excellent long term stability, and are therefore often the prime choice for use in the catalytic SCR system. Research projects carried out at Johnson Matthey, as well as elsewhere, have highlighted the excellent performance of small pore zeolites, such as chabazite (CHA) combined with Cu for the SCR reaction. With such small pore systems it is very important to understand not only the intrinsic NH3-NO reaction kinetics and the chemistry of the active sites, but also the diffusion processes that might be important in the design of an optimum SCR catalyst.

In association with ISIS the Hub held a workshop on, “Neutron Techniques in Catalysis” in Nov 2014. There were a mix of delegates from industry and academia, with over fifty attendees. This helped to provide training and knowledge transfer to catalytic community who may previously not have used neutrons leading to a range of new users including Johnson Matthey, Academics from Southampton university and UCL.

Following this workshop scientists from ISIS, The Catalysis Hub and Johnson Matthey proposed and led a special issue of PCCP edition, “Neutron scattering in catalysis and energy materials”.

Use of Neutrons for catalysis research has led to industrial relevance.