Home Community How the Hub can help academics

How the Hub can help academics 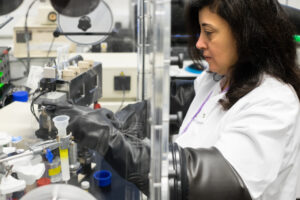 The UK Catalysis Hub will help researchers to expand their knowledge base through direct interaction with central facilities, training and collaboration, for example ISIS on neutron techniques and modelling, specialised workshops, staff development and training provided by the academic partners including, for example, through interactions with the cognate CDTs, modules provided by the industrial partners, involvement in co-supervision of PhD projects and through participation in the Catalysis Summer School held in Liverpool every two years. The management skills of the researchers will be developed through their organisation of research meetings, conferences and workshops within the project in combination with the UK Catalysis Hub administration and Management Group.

Events for ECRs and students

In addition to conferences and workshops the Hub plans to run a series of events for students and ECRS to develop knowledge and skills in areas including advanced techniques for catalysis which would include advanced materials and synchrotron, neutron and laser techniques. Another key area of development that is essential for catalysis is modelling in both chemo and biological catalysis. This would include data and machine learning. Other areas that would be valuable to catalytic researchers are spectroscopic analysis, signal quantification and also sustainability assessment including life cycle analysis.

The UK Catalysis Hub has secured Block allocation access to Diamond Light source B18 beamline for XAFS. The proposal is made on behalf of the UK Catalysis Hub network and intends to provide members with frequent and flexible access to B18, the core XAFS beamline. We have actively embraced new users and new areas of catalysis, assigning time across a broad range of catalytic science (homogenous catalysis, heterogeneous catalysis, biocatalysis, and electrocatalysis). To date we have supported the research efforts of > 20 research teams from > 10 institutions. For more information and details on application (when open) please see the BAG page.

Get in touch with us at the earliest possible stage in proposal development so that we can work with you to ensure that any support we offer is fully integrated and meaningful. Please contact the Project Manager Dr. Josie Goodall – josie.goodall@rc-harwell.ac.uk, for more information about current Hub activities, conferences and opportunities.