The Catalysis Hub was created with EPSRC funding with the aim to first establish a world-leading, comprehensive and coordinated programme of catalytic science in the UK; secondly to develop new knowledge and promote innovation in and translation of catalytic science and technology; and thirdly to enable the UK to regain and retain its world leading position in catalysis. The Hub was launched in April 2013 at its physical centre in the Research Complex at Harwell with a program of initial scientific projects starting from July 2013.

A key feature of the Hub ethos is that all projects involve multi–institutional collaborations.

The EPSRC funded UK Catalysis Hub for a further 5 years starting 1/12/2018. Looking forward, the UK Catalysis Hub will focus on developing new catalytic processes for more effective use of water and energy, waste minimisation, and material reuse and reduction in gaseous emissions. The scientific research themes of the UK Catalysis Hub Phase II are Core, Optimising, Predicting and Designing New Catalysts, Catalysis at the Water Energy Nexus and Catalysis for the Circular Economy and Sustainable Manufacturing. The Biocatalysis & biotransformations theme will also continue to March 2020. Read more about our new research programme.

The hub will continue to have a physical centre at the Research Complex at Harwell (Oxfordshire) and will co-ordinate a collaborative research program across the UK with 25 universities directly involved in projects and over 45 involved in a wider network across the catalysis community. The Research Complex houses the Hub’s cutting edge catalysis facilities in a vibrant an innovative research environment across the physical and biological science disciplines. The Research Complex location on the Harwell campus offers key collaborations with the UK’s cutting edge major facilities including Diamond Light Source, ISIS Neutron and Muon Source, and the Central Laser Facilities, all of which stimulate the development of new techniques and advancements in understanding.

The scientific structure of the Hub was initially built round four main themes: Catalysis by Design; Energy; Environment; and Chemical Transformations, each of which has a theme leader who serves on the management group of the Hub. A fifth theme of Biotransformations was subsequently added. The initial scientific programme focused on the projects outlined in the original proposal.  Read more about the initial themes.

Objectives for the UK Catalysis Hub:

(i) To deliver an ambitious and adventurous scientific programme, coordinating the work of UK scientists in catalytic science in fundamental areas relating to catalysis for the circular economy and sustainable manufacturing.
(ii) To maintain an effective and clear management structure with strong scientific leadership for a coordinated UK catalysis research programme that cuts across traditional boundaries in catalytic science.
(iii) To sustain a staff, resource and equipment base allowing a platform for internationally leading catalytic science on the Harwell/RAL campus.
(iv) To contribute to the development of instrumentation and facilities on ISIS, Diamond and the Central Laser Facility, to enable new experimentation in catalytic science, with special emphasis on in situ studies of working catalysts.
(v) To publish a substantial volume of high quality scientific papers in major international journals.
(vi) To train a cohort of postgraduate research students associated with catalytic science in the Centre.
(vii) To contribute to a visitors’ programme for both national and international scientists.
(viii) To contribute to training and dissemination events, including a high profile annual meeting associated with the UK Catalysis Hub.
(ix) To promote knowledge transfer and exchange between academic catalytic scientists, industry and other stakeholders.
(x) To sustain and further develop the UK Catalysis Hub as a world leading centre for catalytic science through establishing international collaborations of the highest calibre.

For more information about the centre and its research activities please contact Dr Josie Goodall (josie.goodall@rc-harwell.ac.uk) 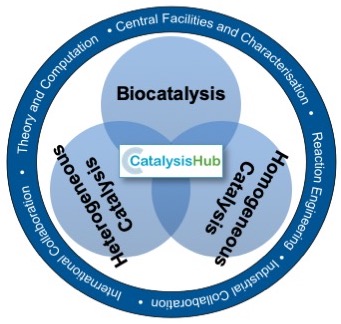