The hub will continue to be focused around four themes coordinated by a core theme. The scientific themes are:

The CORE theme will coordinate all the Hub activities and interaction with the UK catalysis community and ensure technique development at the Harwell Hub through two science workpackages The core programme will provide the key management and governance for the scientific programmes operated by the Hub, developing and building the community; ensuring strong academic-industrial interactions and international engagement and promoting dissemination and outreach, thereby facilitating and connecting the work within the proposed new Hub Science themes (see Figure); in addition to the existing Biocatalysis Theme (EP/M013219/1.) Each science theme has seven projects that will work in conjunction with each other and the Hub Core will ensure the new themes interact fully with this existing theme. Over the next five years, the structure, programme and activities of the core component of the Hub will therefore comprise: 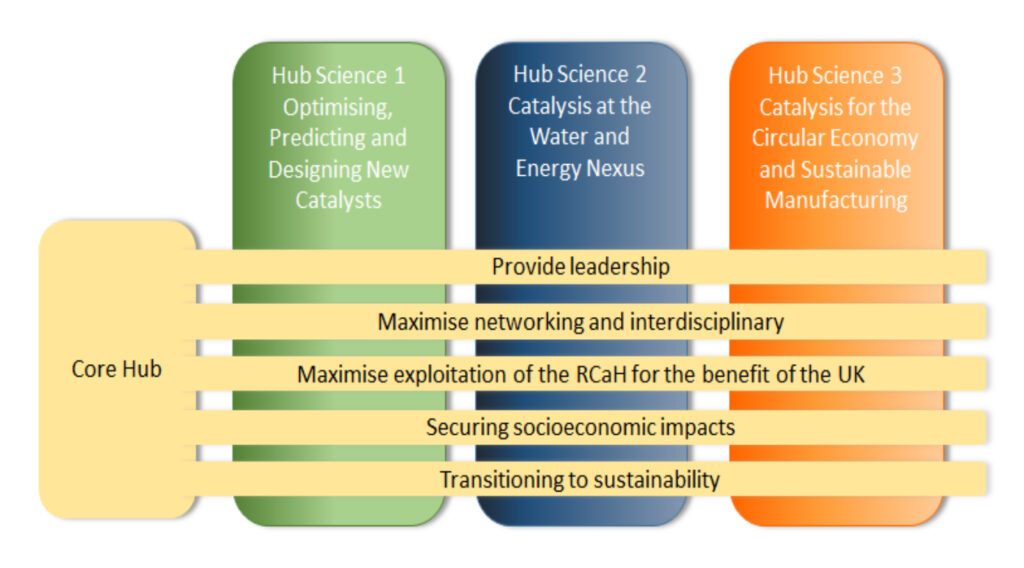 One of the major successes of the UK Catalysis Hub has been to increase the efficient and effective use of the facilities at the Harwell campus for catalytic research. With the Diamond Light Source, through the Block Allocation Group (BAG) time on the core XAFS beamline (B18), the Hub has rapidly expanded the user base for X-ray absorption studies over the last five years. The Hub has also encouraged its network to use neutron scattering; a number of groups associated with the hub are now regular users of neutron scattering at ISIS, with a large growth in the use of quasielastic measurement for interrogating diffusion processes and Inelastic Neutron Scattering (QENS, INS). In recent years, the Hub’s interaction with the Central Laser Facility (CLF) has resulted in the first in situ catalytic studies being performed. One outcome from these fruitful collaborations with the facilities on the Harwell campus, is the realisation that we are pushing the capacity of these facilities. In addition, we recognise that there is a drive for improved sample environments to push the boundaries of in situ/operando measurements. This five-year plan aims to provide high throughput sample environments across the facilities for in situ and ex situ studies of catalytic processes.

In order to understand the nature of materials and processes relevant to catalysis and other applications, a wide range of experimental and computational simulation techniques need to be deployed and their data and information combined into single coherent models. For this to be possible the various techniques need to become more accessible to the non-experts and the data need to be recorded, combined and exchanged seamlessly. To this end, we propose to develop a Catalysis Data infrastructure and a Catalysis Research Workbench to enable further and easier exploitation of stored experimental data and assist in the characterisation or structure solution of catalytic compounds by integrating experimental and computational techniques.

The Catalysis Data Infrastructure will provide an integrated system supporting a catalogue of information on catalytic materials and their properties, together with an associated data repository containing datasets of derived data, spectra, and images, so that users can deposit and access these objects associated with the materials being investigated. There will also be a record of associated experiments undertaken at the Hub, with links to datasets available within facilities. The system will link and integrate the data infrastructure into a wider eco-system of existing information tools relevant to catalysis science.

The Catalysis Research Workbench will provide a virtual research environment to support data analysis and interpretation, which will allow users to load relevant data from the Catalysis Data Infrastructure and access relevant modelling, simulation and data analysis software as well as suitable compute resources, potentially through cloud access. Further extensions will include integrating with electronic notebooks and supporting workflows. This virtual research environment will be built by linking data and software tools into an easy to use graphical user interface, which will be accessible remotely thanks to cloud technology.

The core theme has a vibrant workshop programme planned for the new phase of the UK Catalysis Hub spanning the whole of catalysis and linking communities. Upcoming workshops include; Symposium between LIKAT and UK Catalysis Hub: Future of Sustainable Catalysis, UK Catalysis Hub Spring Conference, FELIX: Free Electron lasers for the Catalysis Community, UKCC 2020, Clean energy and a Solar Fuels networks workshop among many others. Visit the events page to find out more about the new programme.