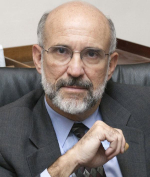 Enrique Iglesia received a B.S. from Princeton University (1977, summa cum laude) and a Ph.D. from Stanford University (1982) in Chemical Engineering. In 1993, he joined the University of California at Berkeley as Professor of Chemical Engineering, after twelve years of research and management experience at the Exxon Corporate Research Laboratories. He is currently the Theodore Vermeulen Chair in Chemical Engineering at the University of California at Berkeley and a Faculty Senior Scientist in the E.O. Lawrence Berkeley National Laboratory. He has served as Editor-in-Chief of the Journal of Catalysis (1997-2010) and as President of the North American Catalysis Society (2009-2017). He is currently the Vice-President and President-Elect of the International Association of Catalysis Societies.

His research group addresses the design, synthesis, and structural and mechanistic characterization of inorganic solids useful as catalysts for chemical reactions important in the production, conversion and use of energy carriers, in sustainable petrochemical syntheses, and in the protection of the environment. These studies exploit novel synthetic protocols for the synthesis of active nanostructures and of isolated single-site catalysts within microporous and mesoporous solids, as well as techniques for the characterization of the local structure and atomic connectivity in these inorganic solids, in most instances during catalytic reactions. These studies also involve steady-state and transient kinetic methods and isotopically labeled reactants and products in order to elucidate the mechanism of catalytic reactions on surfaces, at the level of primary and secondary reaction networks and of elementary surface steps using a seamless combination of systematic experimental assessments benchmarked against rigorous analysis by density functional theory and higher-level treatments. The relevance of his research to the practice of catalysis is evident from his many patents, several of which have provided enabling intellectual property for processes involved in the conversion of natural gas, in applications of zeolite catalysis to petrochemicals synthesis and environmental control, and in the conversion of renewable oxygenate feedstocks to fuels and chemicals.