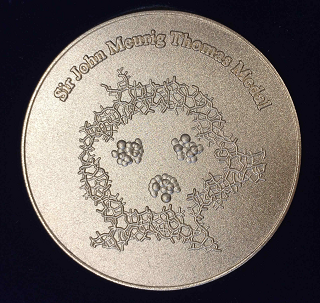 The UK Catalysis Hub has launched the call for the JMT Medal 2020. The medal honours the achievements of Sir John Meurig Thomas, a distinguished professor in the field of catalysis.

The JMT Medal is awarded to a person of outstanding achievement in catalysis or a closely related field every year.

In addition, the winner of the medal will also be invited to deliver a lecture on catalysts as part of the UK  Catalysis Hub biannual conferences.

The medal will be awarded to Scientists working in the UK in all fields of Catalytic science and engineering.

The medal will alternate between Scientists in the Early and Mid-career stage. The selection committee will consider the following aspects of all nominations as appropriate:

The deadline for nominations is 15th March 2020 and the 2020 JMT Medal will be awarded to a Mid Career researcher in Catalysis.

• Citation (250 word maximum) statement of why the candidate should receive the award. This is the key document in the nomination and this information should be relevant to the achievements for which the award is being offered.

• Biographical Sketch (250 word maximum); this provides background information on the nominee and summarizes past accomplishments.

Please send any nominations to josie.goodall@rc-harwell.ac.uk  Please use the subject: Nomination for JMT Medal