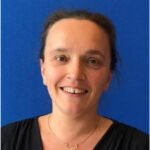 She graduated as engineer in physics at the Ghent University in 1997 and obtained her Ph.D in 2001 on a subject dealing with theoretical simulations of chemical reactions with static and dynamical approaches under the supervision of Prof. M. Waroquier. She was co-founder in 1997 of the Center for Molecular Modeling (CMM,http://molmod.ugent.be), which is now composed of about 40 researchers. Since 2012, she is head of the CMM responsible for daily operation including organizational, logistics and personnel affairs. Within the CMM, she is scientifically leading the Computational Molecular Modeling division, consisting of 6 postdoctoral researchers, 16 PhD students and 5-10 Master students (on a yearly basis).

After her PhD she received a postdoctoral fellowship from the National Fund for Scientific Research Flanders and had the possibility to travel to various foreign institutes for short periods. In 2011 she was awarded the laureate of the Royal Academy for Science and the Arts of Belgium. She is recipient of two flagship grants from the European Research Council: a Starting Grant in 2010 and a Consolidator Grant in 2015. Within the framework of the first ERC grant, she built up a large expertise in first principle kinetics in nanoporous materials. Her current research interests focus on first principle molecular dynamics simulations of complex chemical transformations in nanoporous materials, for which she received an ERC Consolidator grant in 2015.

Van Speybroeck is author or co-author of about 330 peer-reviewed scientific papers. Her work received about 9300 citations so far with a Hirsch index of 51. Various research articles were published in the highest ranked journals in the field such as Science, Nature Chemistry, Nature Communications, Physical Review Letters, Chemical Society Reviews,… The scientific work was furthermore disseminated by numerous invited and plenary talks on international conferences and prominent research institutes.

She is also an elected member of the Royal (Flemish) Academy for Science and the Arts of Belgium (KVAB, www.kvab.be). Furthermore she participates in various activities to enhance the impact of science on society. From 2012-2017, she was member of the STEM-platform which was installed by the Flemish government to promote Science, Technology, Engineering and Mathematics training and careers. Van Speybroeck serves on many boards and panels for research.