The Hub has a strong and growing engagement with UK industry which is promoted and developed by the regular meeting of its Industrial Advisory Panel (IAP). Input from Industry has been a recognised part of the UK Catalysis Hub and can be traced back to the original Town Meeting held in the Royal Society where initial projects were formulated. This dialogue has been ensured by the establishment of an Industrial Advisory Panel, which provide comment and feedback to the Management of the Hub on a regular basis. Beyond this formal mechanism, industrial participation in Hub conferences and meetings is encouraged.

Industrial support has been provided for projects across all of the Hub themes. In the Call for Projects in 2015 this was seen to continue to increase and indeed projects are more likely to be funded if they have Industrial support.

Interaction with industry has also been deepened by the following:

Read more about our work with industry below: 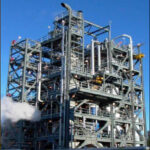 Read more about how the UK Catalysis Hub can help industry.